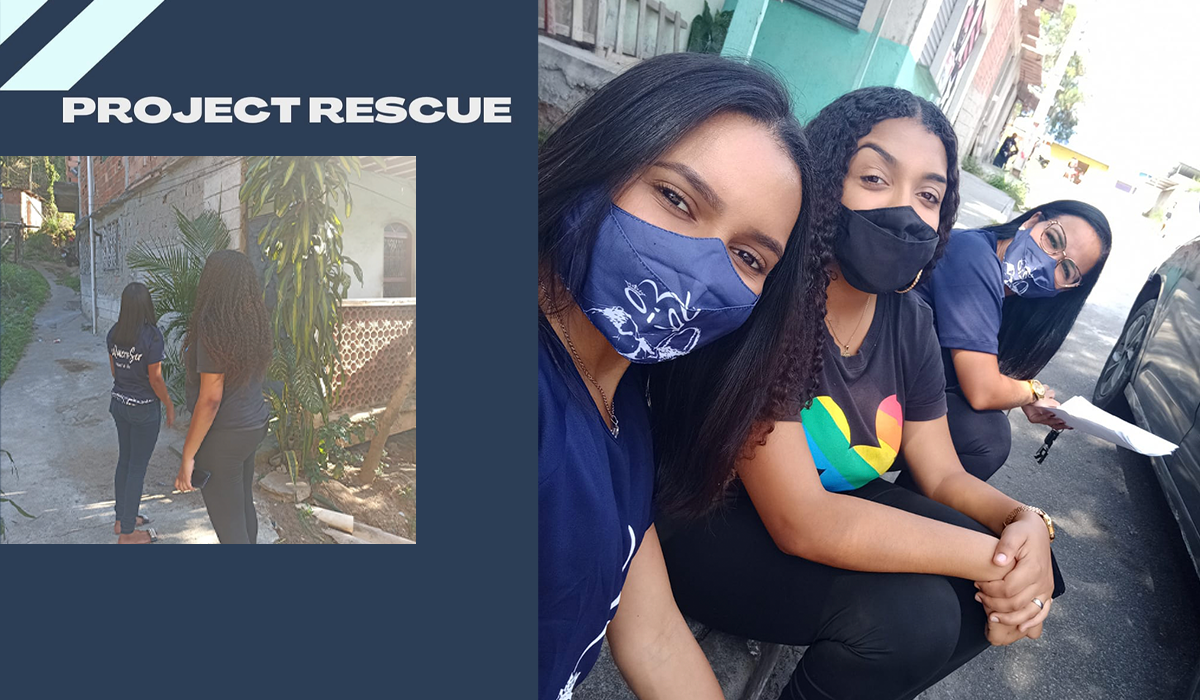 Nonprofit UMRio is delivering a new "Project Rescue" initiative to help identify children in Morro do Castro, Brazil who have dropped out of the school system as a result of the pandemic. Launched one month ago, the successful project is helping them to return to their education while also understanding what caused them to drop out of school in the first place.

Morro do Castro is one of the more isolated favelas in Rio de Janeiro and is marked by a failing public education and healthcare systems, poverty and more. Launched in 2013, UMRio uses rugby as an entry point to create a safe and enabling environment for vulnerable youth in the area to develop skills and access to services and opportunities.

During the pandemic, the 2020 Beyond Sport Global Award shortlisted organization adapted its sports-based youth development model to respond to the fast-changing circumstances and needs of its beneficiaries. This included providing up to 30 hours a week of online content, installing internet for students facing digital exclusion and delivering up to 22 tons of food to meet the heightened levels of food insecurity caused by Covid-19.

Vaccines are now being rolled out in Brazil, meaning that local schools in Morro do Castro have begun to re-open after more than 18 months of operating remotely. According to UNESCO, Brazil’s schools have been kept closed longer than other countries, a total of 40 weeks in 2020, which is twice the world average. In addition, 5 million children between ages 6 and 17 in Brazil didn't have access to education in November 2020, the worst situation in two decades. A lack of strategy to combat COVID-19, with no nationwide lockdown and low levels of testing, consequently failed the youth of Brazil. A combination of increased levels of poverty, digital exclusion and prolonged school closure has provoked an educational crisis. Project Rescue was created to address this challenge head on.

The project includes a designed outreach methodology to identify and locate children who have dropped off a schools’ radar and bring them back to education, with a current focus on children aged between 5-14 years (mandatory school years). In Morro do Castro, 63 children in this demographic have completely fallen off the schools’ radar since the start of the pandemic and were the hardest to reach. Truancy levels hit 85 percent during the pandemic, but the school was able to reconnect with only a portion of students, leaving some missing. 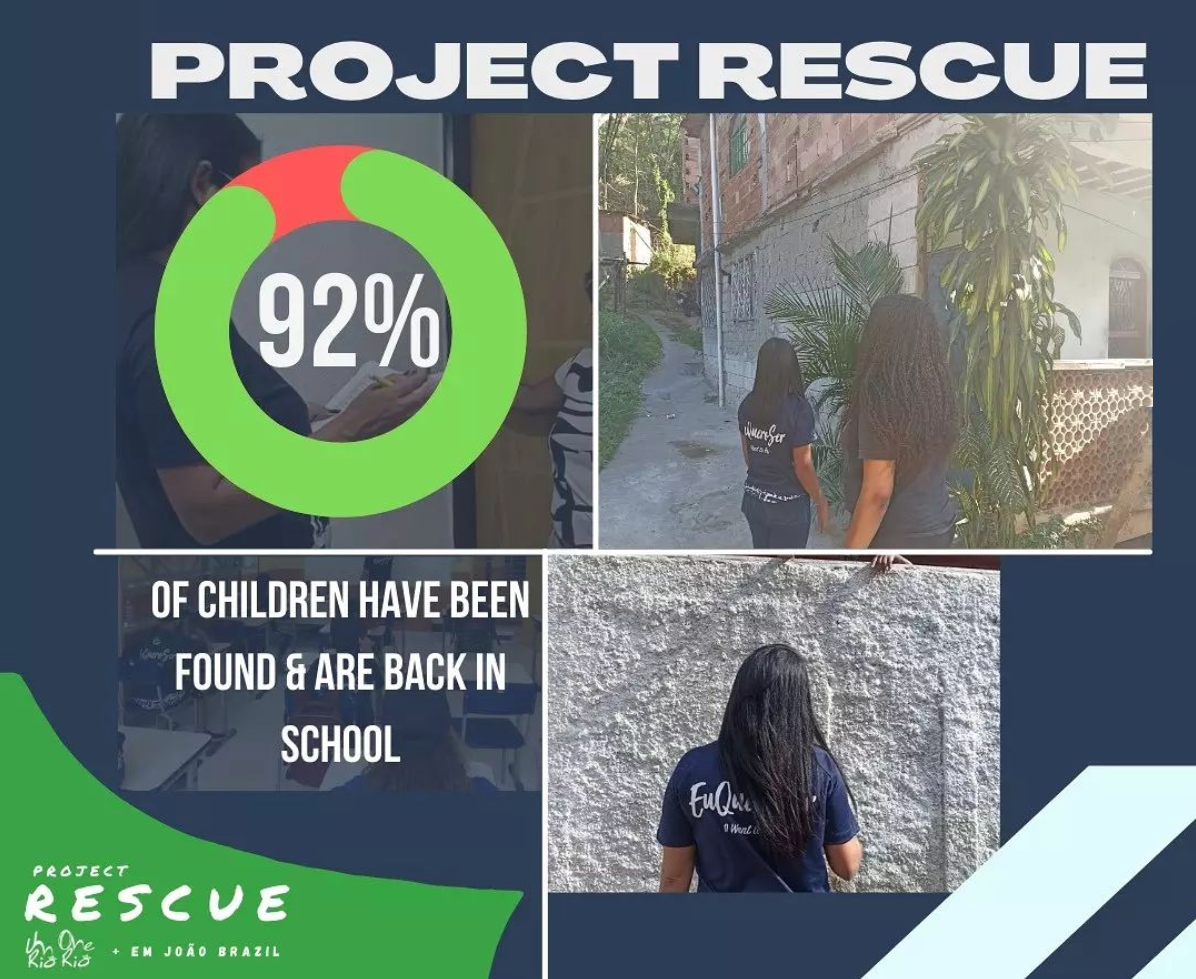 UMRio’s social educator, Rachel Alcântara formed an outreach team as part of phase one, which included youth leaders Alessandra Pereira and Carina Santos (who has been at the forefront of the Rexona and Beyond Sport Breaking Limits programme at UMRio). In September, through school records, they directed the project’s street-based outreach which encompassed going door-to-door and offering support to families who had encountered barriers to re-enrolling their children back to school. The projects focus here was to concentrate on those not within anyone's reach.

The total school population in Morro do Castro is 710 and effectively 8.9 percent of this school population went missing. In just two days of outreach, 57 percent of these children re-enrolled and in just over two weeks this rose to 83 percent. A month into Project Rescue, 92 percent of these children are back in schools. It was Project Rescue's capacity to reintegrate the hardest-to-reach children that has resulted in UMRio's collaboration with Niterói City Government, a partnership that aims to bring the methodology to scale and identify 1,418 children who are out-of-reach city-wide.

“I have never seen anything like this. On the day that UMRio’s outreach started, children who have been off the grid for almost two years were flooding in. This is historic and needs to be taken elsewhere,” said Tânia Sena, Head Teacher at João Brazil School.

The project is nearing the end of its first phase with searches continuing. Sport, and in particular, rugby, is set to play a pivotal role in promoting the re-entry of older young people in Morro do Castro back into education. UMRio has also recently re-launched in-person rugby training, which is much needed as 81 percent of its older returning participants have been inactive academically and physically for most of the pandemic; many had given up on education altogether.

The organization is now gearing up for its phase two focus – Retention. Phase two will also work with 85 percent of students who had limited to no access to education during the pandemic. To UMRio’s Founder and Director, Robert Malengreau, sport has a pivotal role in both further outreaches and in retaining students at the schools, with the expectation of sport to come center stage now that Project Rescue has broadened its scope to older age groups.

“As we move to use the Project Rescue methodology to reach older age groups, where education may not be compulsory, sport will take center stage in our strategy. Children who were 14 at the start of the pandemic are now 16. The responsibilities and priorities of these young people may have changed in the light of the pandemic and their age. However, in a context like Morro do Castro, where 82 percent of kids play sport, we believe sport is an important constant and on that can become an important re-entry point to formal education for many adolescents,” he stated.

Once back to school, sport functions as a familiar, supportive and safe space for youth who can communicate their needs with staff and interact with other students after – at times – a 19-month gap without any contact.

In trying to understand why these children haven’t returned to schools after the pandemic, UMRio is able to help provide conditions for their return and sustained engagement in education so that they, rather than their circumstances, define their futures.