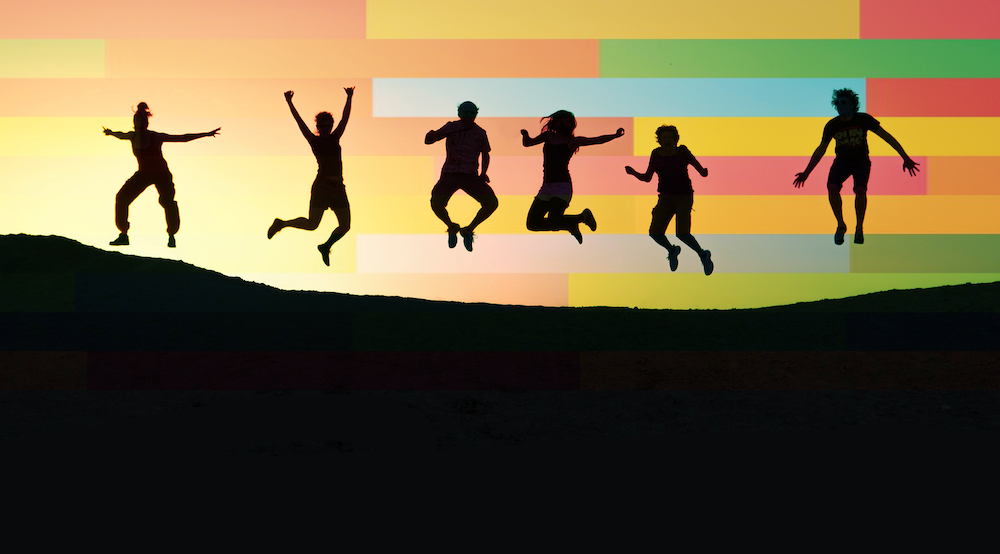 MEET THE INAUGURAL BEYOND SPORT YOUTH ADVISORY BOARD

In April, we put out the call for passionate young leaders to form our first-ever Beyond Sport Youth Advisory Board. Impressive applications rolled in from around the world, spotlighting incredible thinkers and doers who are elevating sport’s role in tackling our biggest social issues - for people and planet.

"We’re delighted to launch our first ever Youth Advisory Board. When youth lead, we can build a more sustainable world, informed and shaped by the most active young generation we’ve ever had," said Fred Turner, Executive Director of Beyond Sport. "Giving this group of incredible young leaders a platform to amplify their voices and learn from others while helping Beyond Sport be more intentional in our work is an exciting prospect. We can’t wait to get started."

Today, in honor of International Youth Day 2021, meet the eight stand outs who are using sport with intention to positively change lives around the world.

Reflecting a diversity of backgrounds, experiences, issue areas and aspirations, they will interact directly with Beyond Sport leadership to provide input on existing programs and campaigns, identify areas for personal growth, change and improvement and help shape how we drive sustainable social change through sport.

19-year-old Siham lives in London and has interned with various media outlets. She dreams of working in the sports industry to create change and heighten the visibility of Muslim women. She is determined to increase media coverage of women in sports in the belief that it would inspire younger generations to get into sports.

Siham, who is Somali, is passionate about creating safe spaces for women and young girls to enjoy sports – especially those from ethnic minority communities. Upon realizing that many women and girls dropped out of sports after secondary school because of the lack of spaces to keep active and stay healthy - or because they didn’t feel comfortable in available spaces - she created a summer women’s community football initiative aged 17 that is largely made of Muslim women. In the next couple of years, she hopes to expand it to young women in Somalia.

“For me, sports has always been an outlet and something I look for to destress and bond with other people.

My main goal is to open more doors and create more opportunities through sports for people from ethnic minority and disadvantaged families. I care deeply about gender equality in sports and providing equal opportunities for all.”

READ OUR INTERVIEW WITH SIHAM

Carolina splits her time between her home of Tegucigalpa, Honduras and Cornell University in Ithaca, New York where she is studying Human Development. Having seen others around her suffer from mental illnesses, trauma and inequality, she wants to normalize conversations on these issues and share a diversity of stories on what people are dealing with. She especially wants to lift taboos on speaking about mental health issues and disabilities.

The 19-year-old is extremely active in her community having co-founded Alzando la Voz (Raising our Voice) to spread awareness on the emotional, verbal and physical abuse women face in Honduras. At school she volunteers with Rally Cap Sports, working with children and adolescents with disabilities so that they can have an opportunity to exercise and play sports. She strongly believes that everyone has the right to do what they are passionate about and people with disabilities are no exception.

“Sports can have an unimaginable impact on anyone’s life; they bring happiness, joy and, most importantly, hope.

READ OUR INTERVIEW WITH CAROLINA

Hailing from Balandra, 22-year-old Business Management student, Tyrel, found his inspiration in the water. As a young boy, he met Waves for Hope co-founder, Chris Dennis, who would take him and other kids surfing and support them when needed. Now, as mentor for the organization, he is empowering young people in his community and supporting their mental, physical and emotional well-being.

With most crimes, drug use and abuse in Trinidad committed by youths aged 15 – 21, and knowing that these same youth will become the leaders of his country, Tyrel was motivated to try and make them better people - with a goal of creating a better future for all and being a positive role model for his younger siblings.

“We use surfing to attract at-risk kids and youths to our program, which then not only teaches surfing but also introduces therapeutic activities such as meditation and breathing techniques.

I want to introduce positive role models to the communities and educate the kids and youths about positive behaviors, especially when it comes to coping with stress and difficult situations. The time spent doing sports is also time not spent on the block and around negative role models.”

READ OUR INTERVIEW WITH TYREL

19-year-old Nuth grew up in a rural area of Cambodia near Siem Reap with a deep love for sports and education. She was the first in her family to finish 12 years of schooling and though many in her community view football as ‘unfit and dangerous’ for girls, at 13 she started training with ISF Cambodia’s football programme. She soon realized that she wanted to become a coach and use football to challenge gender stereotypes and support youth.

Now, as an assistant coach with ISF’s Football for Good project, she mentors more than 20 girls aged 13 to 14. Nuth teaches them life skills and how to avoid social issues such as alcoholism, gambling addiction and domestic violence which are negatively impacting her community. She is currently working to become a junior coach.

“Sport can help children to accept themselves and solve their problems. It can also help them escape from violence, alcohol and drugs.

At first my family and community didn’t want me to play, and boys say that girls can't play football like them. So, I want to get rid of this thinking motivate other girls to play like me. It is the best thing for them.”

READ OUR INTERVIEW WITH NUTH

Andrea’s passions lie in supporting immigrants and bridging the educational access gap between white and minority students. These are directly because of her own experience as a DACA recipient and the struggles her parents faced while trying to provide their children with the best life possible.

Born in Côte D’Ivoire, the 20-year-old lives in Burtonsville, Maryland and coaches with youth non-profit, E.S.Y.D.A. There, she teaches kids soccer while also offering educational support such as tutoring, college test preparation and coding courses. As an immigration paralegal and college student who wants to go to law school one day, she hopes to inspire the kids to dream big despite the limitations they face.

“Sports gives kids a space to make healthy relations and an environment to dream. Even if they don’t want to play professionally, our coaches have other professions that could inspire them to look ahead in the future.

I want minorities to know that there is always a way out. No matter how hard it is. I wasn’t supposed to go to college, but because of my good grades and my dedication to my community, I am going…I want younger girls to see that there are healthier activities to do instead of engaging in activities that would make you another anticipated statistic.”

READ OUR INTERVIEW WITH ANDREA

19-year-old student Laiba has always viewed gender discrimination as a major toxicity in society. Having been a victim of sexual harassment at the young age of 13, and encountering ongoing sexual harassment, partisan politics, gender discrimination and more as a woman and an athlete in Lahore, it made her realize that she had to be someone to “break the silence, speak the unspoken ugly truth and name the unnamed.”

This ultimately motivated her to establish her own NGO – the Masoud Sisters Foundation. The organization provide a safe environment for women in sports, teaches self-defense classes, supports girls who need help escaping abusive situations and more. She also finds motivation in playing badminton and dreams of becoming an Olympian.

“Women are always silenced. I aim to see that silence breaking. That will be a major step and the change I crave in Pakistan. Women in sport defy gender stereotypes and social norms, make inspiring role models and show men and women as equals.

Sports gives us hope where it did not exist before and it creates leaders who can change the world.”

READ OUR INTERVIEW WITH LAIBA

Daniel’s drive to help others comes from his family. The 18-year-old from Tacloban City, Leyte grew up in poverty and doesn’t want other families to struggle like his did. He strongly believes that sports can help children and youth develop and become more resilient and productive. In his case, football helped him to cope with his trauma and relieve the stress he experienced from 2013’s super Typhoon Haiyan and its aftermath.

Daniel is training as a football coach and youth mentor with non-profit FundLife. In his role, he teaches about social issues and how to respond on areas covering gender inequality, violence and physical and mental health issues arising from COVID-19. He wants to grow into someone who touches lives and brings people together.

“I decided to step up so that young children don’t lose hope when there are people out there like me to help. I want them to understand that poverty or the lack of financial resources should not stop them from fulfilling their dreams.

Teamwork, persistence and accountability are some skills that are important to have in life and football plays a big part in helping to gain these skills. I use my ability as a coach to develop the trust of most parents in our community so they will allow me to train and teach their children.

READ OUR INTERVIEW WITH DANIEL

Residing in the Busia Municipality, 21-year-old Ferdnand is passionate about using football to to instill positive life skills in young people in and out of school. As a volunteer community impact coach with Coaches Across Continents, he is working to build knowledge, and inspire positive attitudes, practices, behaviors and skills amongst deprived, excluded and vulnerable populations.

Public health and gender equality are among the issues he cares about the most and his focus is largely on advancing community, maternal health and child health, while decreasing teenage pregnancy and early marriage.

“Sports like football are a mobilization tool, and at the organization where I volunteer, it has helped us reach adolescents and attracts all kinds of people.

I want to help build self-esteem among the adolescent girls who are the most vulnerable people in my community. They have been forced into early marriages, raped and have no voice to support them; many are made to become mothers at early ages. I want to build them up to be able to defend themselves and be role models to the generation coming after them.”

READ OUR INTERVIEW WITH FERDNAND

CONGRATULATIONS TO ALL OUR YOUNG LEADERS!