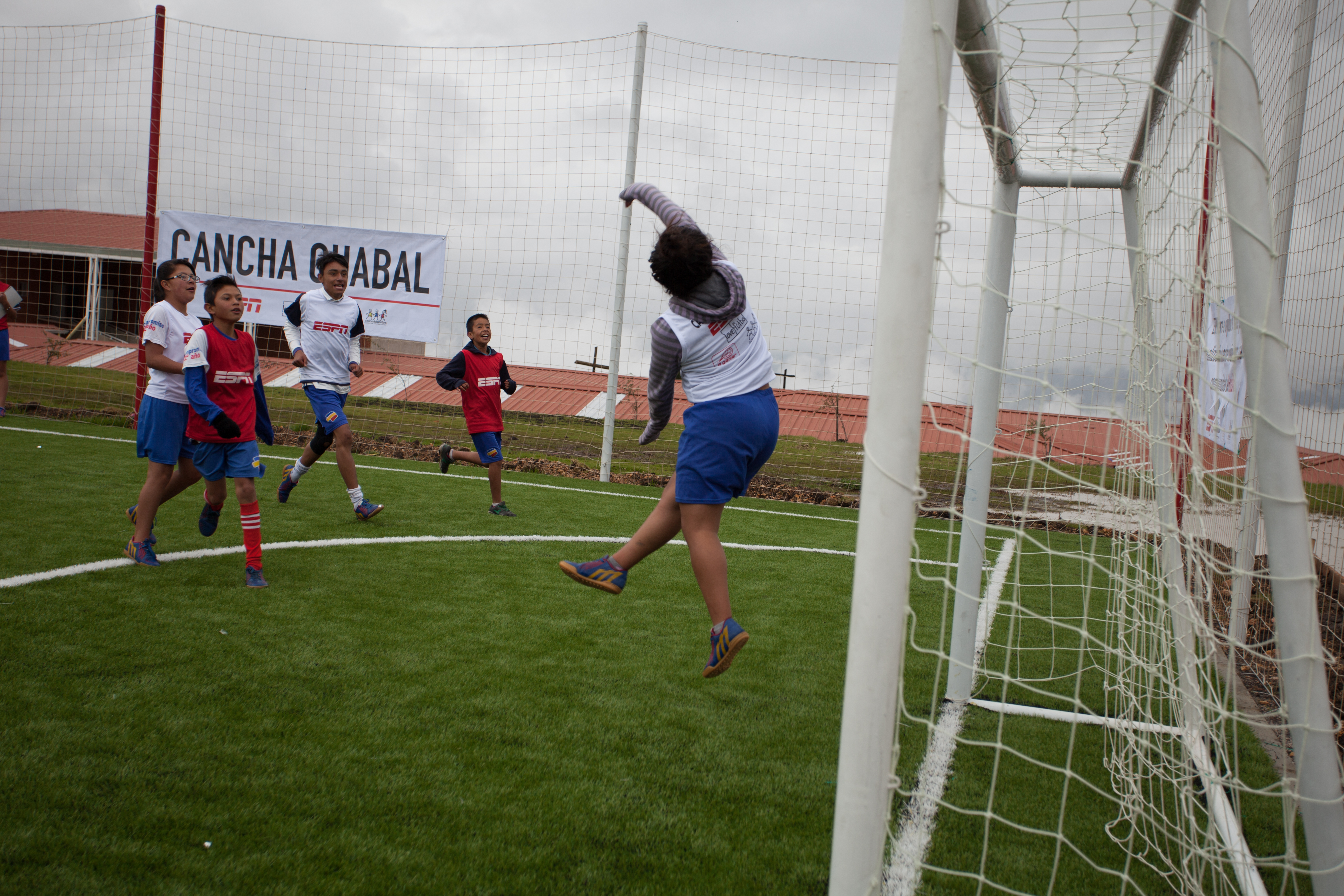 The space will be home to sustainable programs teaching young people employability skills through sports.

Community leaders, local residents, and youth gathered in Ciudad Bolívar, Bogotá, yesterday to participate in the opening of a new multifunctional sports court dedicated to the local community and its residents. The global project, led by ESPN, has now seen five community spaces created across Latin America. Bogotá is the first city in Colombia to benefit from ESPN’s safe space initiative, and it follows Mexico City, Mexico; Buenos Aires, Argentina; Rio de Janeiro and São Paulo, Brazil, as well as one in Bangalore, India. 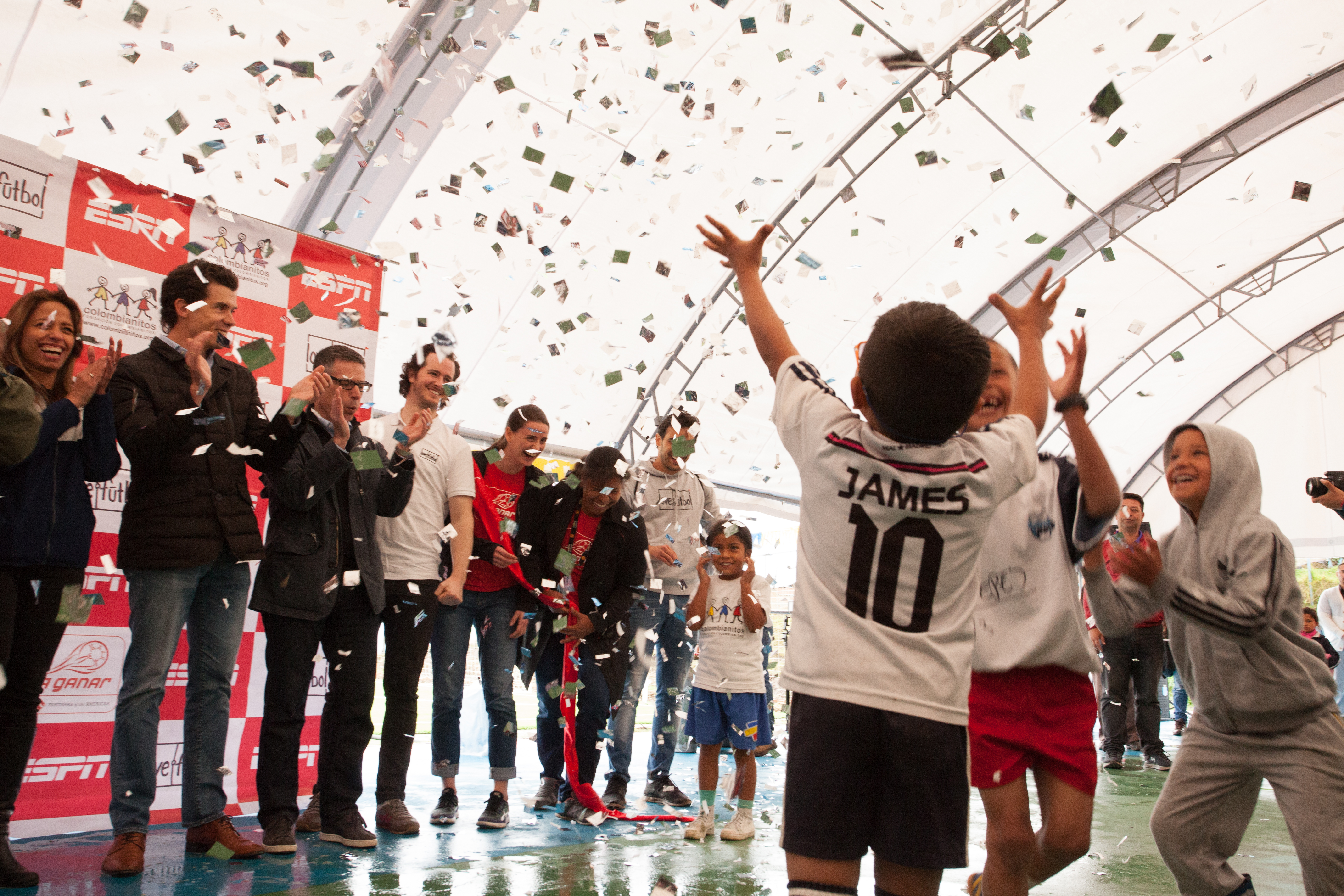 Representatives from ESPN, love.futbol, A Ganar, Colombianitos, and the local community joined together for the ribbon cutting ceremony, officially opening the new space

The court and surrounding area, refurbished with the help of community members and ESPN employees, will be home to ongoing programs for young people in the community where they will learn job skills and be empowered to fulfil their potential, all through the power of sports. The program was developed by award-winning organization, A Ganar, which uses sports as a vehicle to provide communities across Latin America with training and skills that lead to employment through sports and enables young people to achieve success in life. Local sport for development organization, Colombianitos, has been trained in the A Ganar methodology and will deliver the program on the new site. 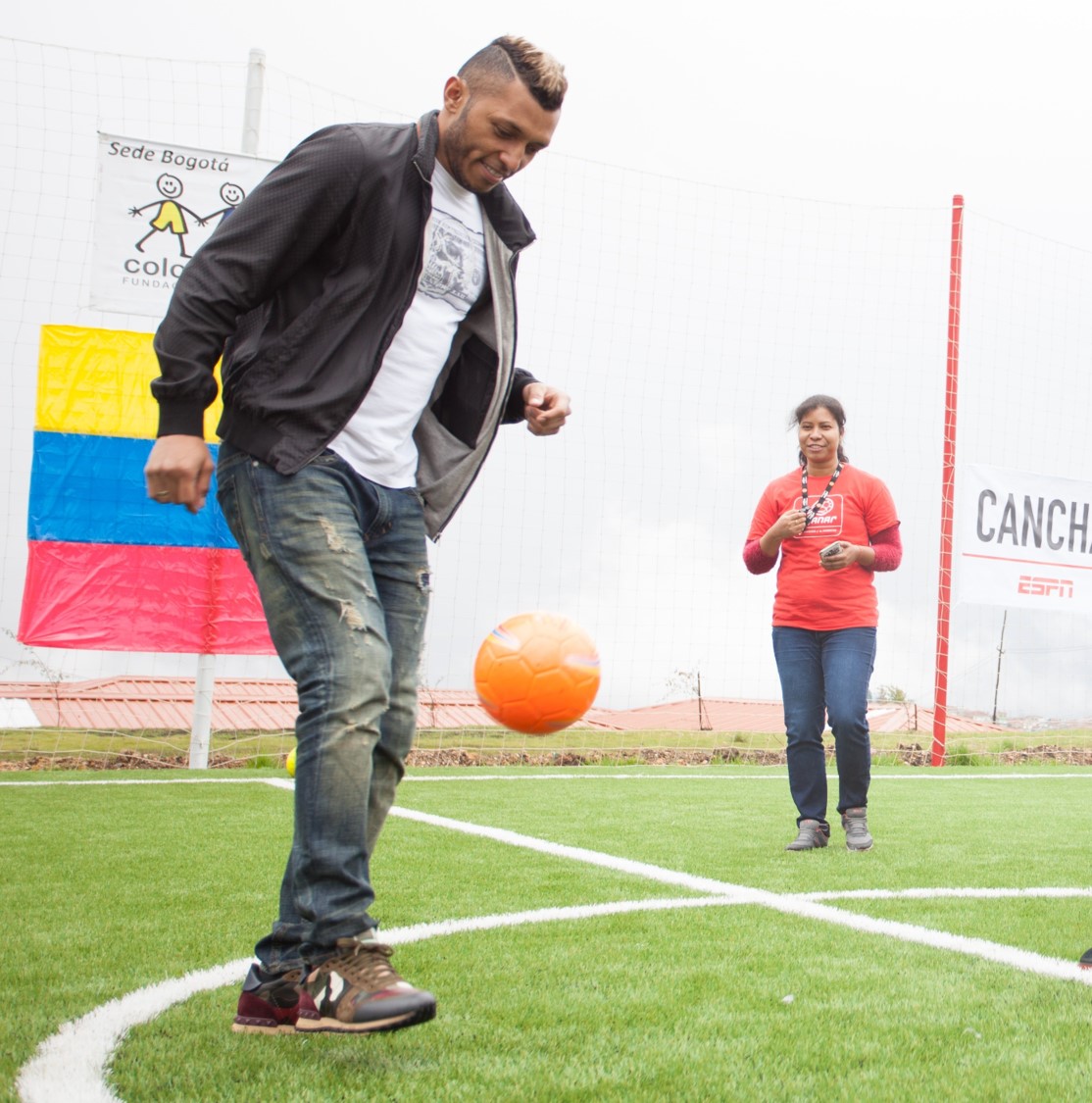 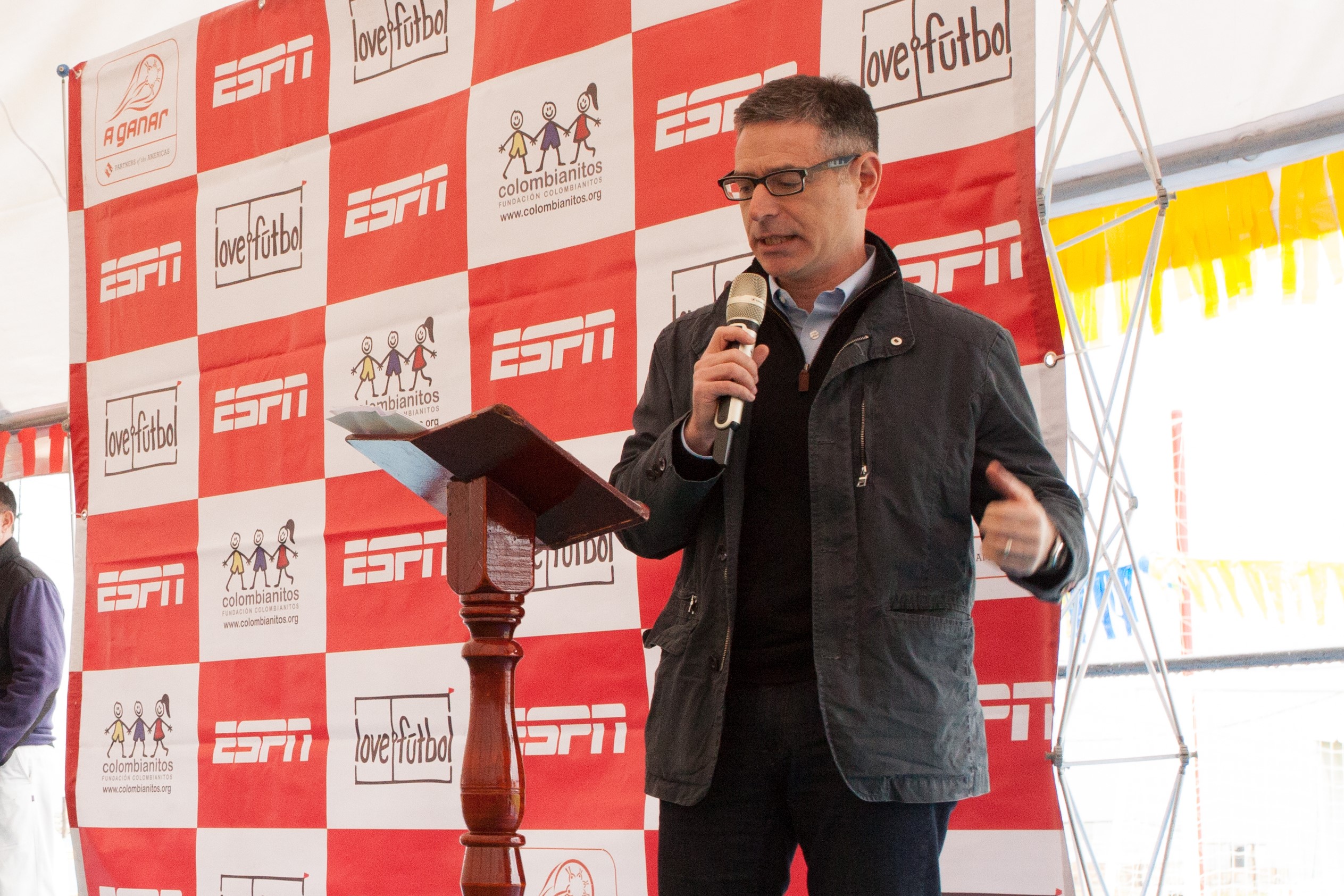 “At ESPN we believe that sports has the ability to transform lives, and we are proud to be able to support and empower communities like Ciudad Bolívar to unlock the benefits that sports offer.” said Eduardo Pokorny, “love.fútbol, A Ganar and Colombianitos have been outstanding partners on this project, helping build this safe space in a community where there is a need and where it can truly make a difference.” 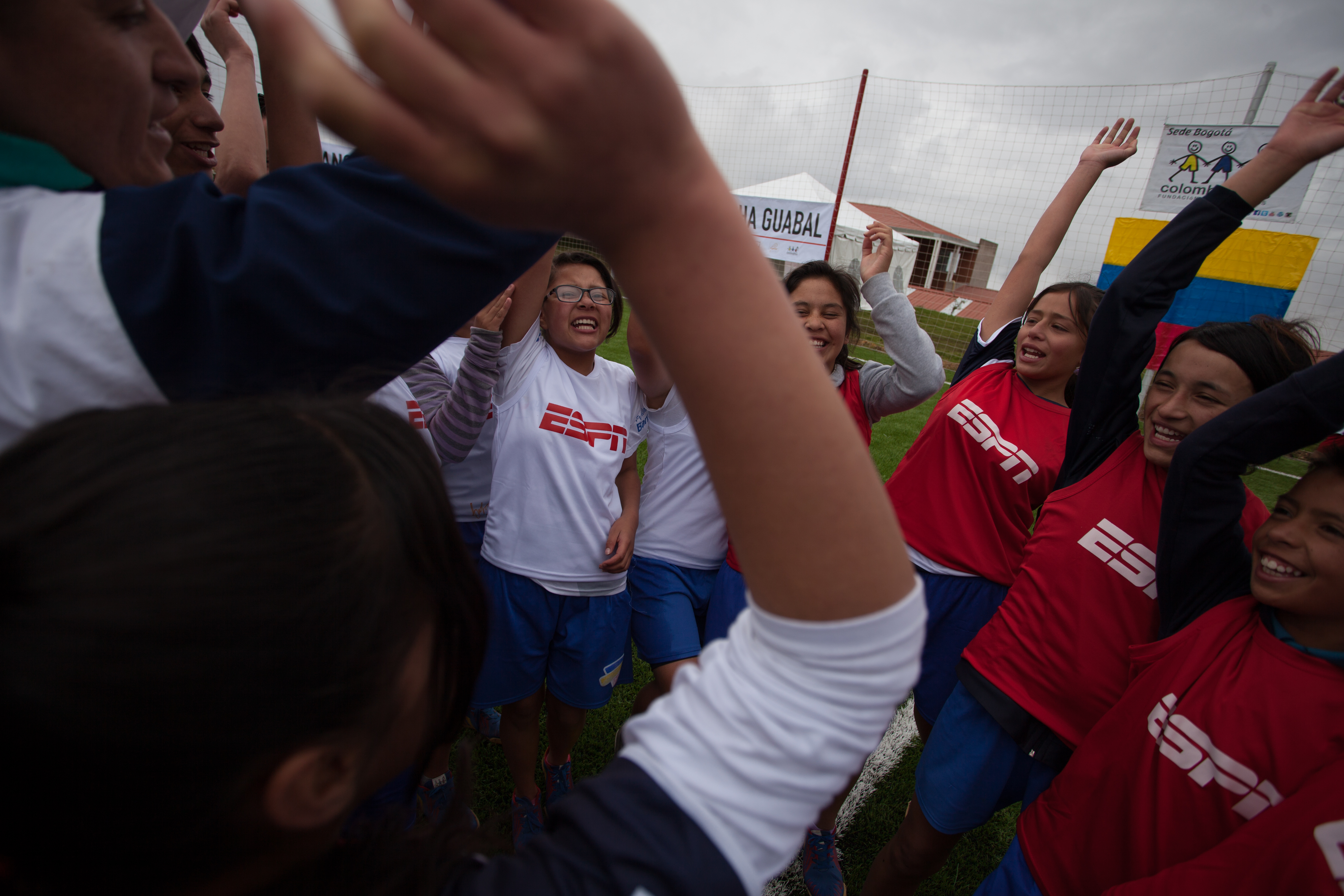 Vivian Puerta, Executive Director, Colombianitos, said, “Providing a space around which the community can come together alongside structured sports program that will engender employment skills is an attempt to support the community in facing and overcoming some of the challenges with which it is confronted.”

love.fútbol, which is known for building community sports facilities all over the world, played a key role in selecting Ciudad Bolívar for the new play space based on the needs of the community. 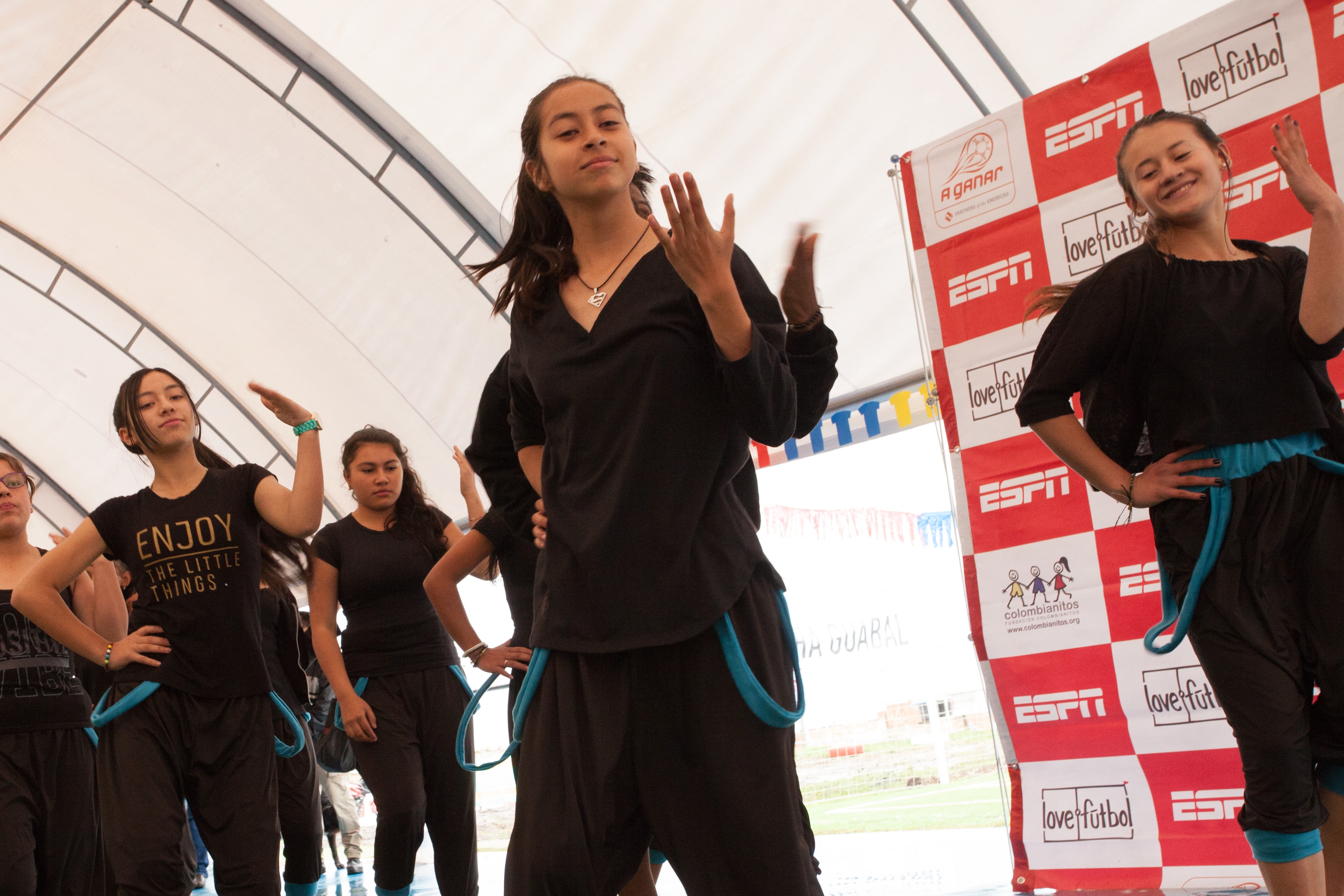 "Bogotá is home for many of us at ESPN. This space is not merely the construction of a sports court, but a space that engaged residents of Ciudad Bolívar in the project from its inception. We wanted the community to have a true sense of ownership that enables sustainable growth and impactful outcomes into the future. Volunteers from the local community, as well as ESPN employees have come together to contribute to the building of this space and we are extremely proud to help make it a reality,” said Juan Bonilla. “This initiative is another way that ESPN is contributing towards the larger goal of using the power of sports to make a difference in the communities we are a part of." 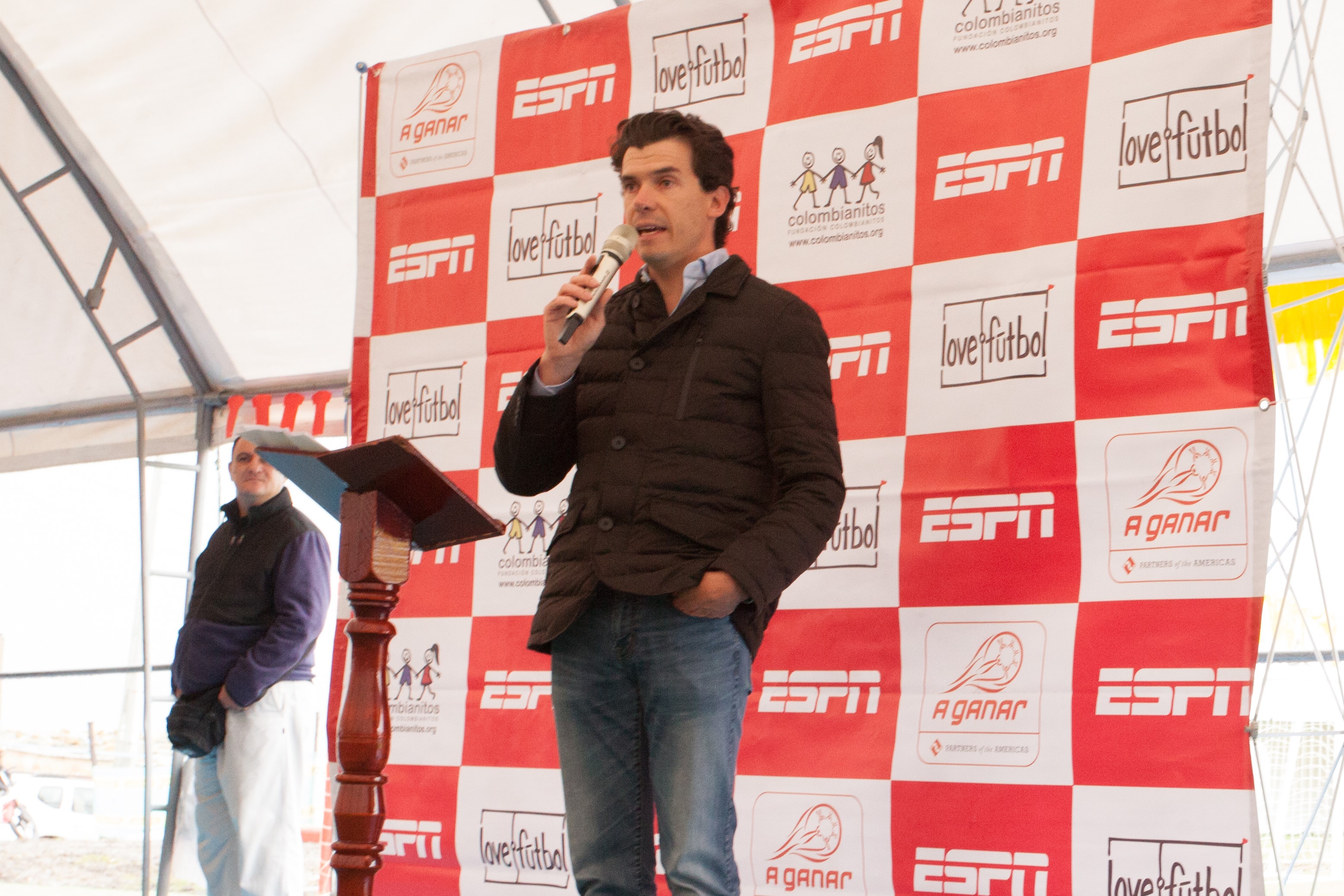 Juan Bonilla, Director, ESPN Colombia, talked about the importance of doing projects like this in communities

A Ganar: Led by Partners of the Americas, the A Ganar Alliance combats youth unemployment in Latin America and the Caribbean using team sports. In essence, A Ganar is a youth employment program wrapped inside of a ball. At-risk youth, ages 16-24, acquire marketable job expertise by building on six core sport-based skills: teamwork, communication, discipline, respect, a focus on results, and continual self-improvement. In 7-9 months, youth learn life and vocational skills and complete internships with local businesses. They learn to bring the best values of sport and apply them to the workplace. A Ganar have trained Colombianitos in their methodology.

Colombianitos: Colombianitos works to improve the quality of life of children, youth and their communities, through sports, play, recreation, education and health. It has significant experience in working with young people affected by the conflict in Colombia. It integrates education with structured, community-driven programs supporting young people to attend school and meet academic requirements, while learning life-long values and positive social behavior such as respect, honesty, friendship, tolerance and fair play. For this project, Colombianitos will deliver ongoing programming on the new sports space using the A Ganar methodology.

thinkBeyond: thinkBeyond helps organizations and people that do good, do it better through sport. They are the global experts in providing consultancy and strategy delivery to brands, sports teams, leagues, federations, talent and governments who want to do good business and create positive social change. Having helped create this initiative for ESPN, thinkBeyond now supports in the implementation across the world. 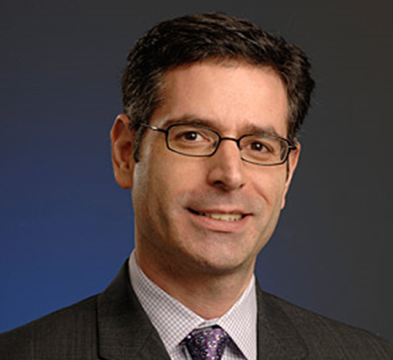 Prior to his current role, Pokorny served as regional CFO for ESPN’s businesses in Spanish-Speaking Latin America and was responsible for oversight of the Finance and Controllership functions for the region.  As part of the leadership team, he played an integral role in developing the region’s business and growth strategy, which included the launch of new linear networks, local websites, production facilities, and regional offices.  He also previously served as Senior Director, Business Development for ESPN International.

Pokorny has been in the media industry for over 15 years.  Prior to ESPN, he worked at Univision Communications where he rose through the ranks of the company’s executive management training program.  He served as Business Manager for Univision Radio and as Director of Corporate Projects for Univision’s Puerto Rico operations.  Prior to Univision Communications, Pokorny held various positions at Chase Manhattan Bank in the Latin American Derivatives division.

Pokorny graduated from Bowdoin College with a Bachelor of Arts degree and received a Master in Business Administration degree from Dartmouth College.  He is based in ESPN’s New York office. 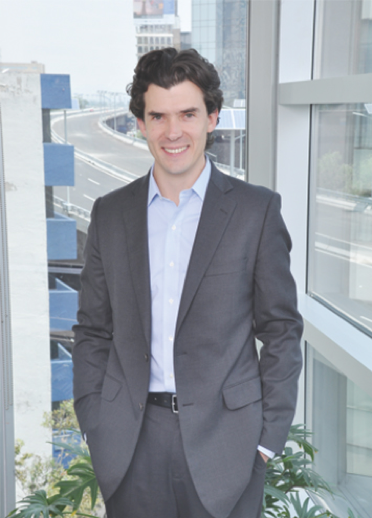 Juan Sebastián returned to Colombia 18 months ago to lead the ESPN Colombia team. Before joining ESPN, Juan had a long career in the advertising industry, to include leading several Colombian digital agencies before moving to Mexico to become Y & R Group President, a role he held for seven years.

Born in Colombia, Juan graduated from the Florida Institute of the Arts in the US with a degree in Internet and Multimedia Development. 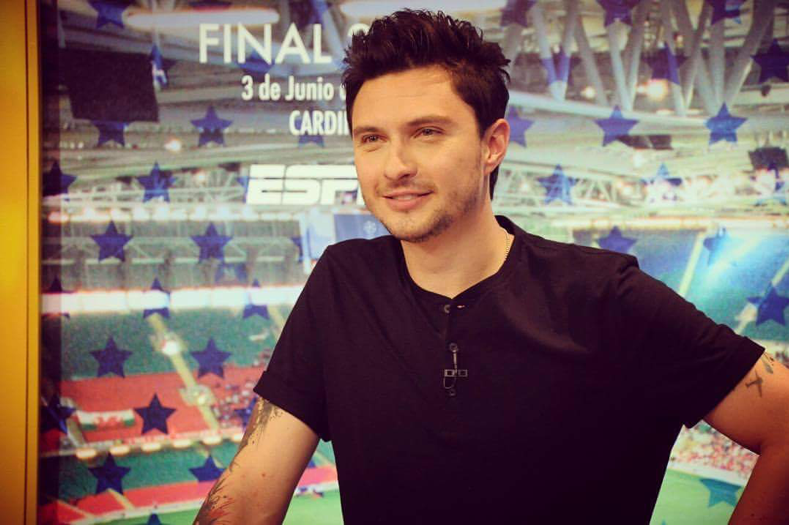 Diego Sáenz is one of the most recognized presenters and musicians in Colombia. With 12 years of experience in radio and television, he has conducted successful entertainment and reality shows for national and international channels. In addition, he is the leader and founder of the Bogota rock band, Pirañas. He also develops digital content as an influencer. With his charisma and experience, he leads ESPN Nexo. 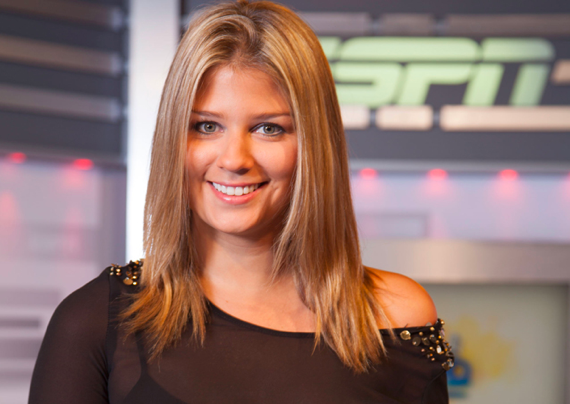 Andrea Guerrero graduated with a degree in Social Communication and Journalism from the Universidad Javeriana. She inherited a passion for football from the cradle, as her father was president and owner of Cúcuta Deportivo. At 22, she started working in radio and television. She covered the 2010 FIFA World Cup in South Africa, the 2011 FIFA Women's World Cup in Germany, the 2011 FIFA U20 World Cup in Colombia and the 2014 FIFA World Cup in Brazil. She is part of the SportsCenter team and is currently the host of ESPN FC.