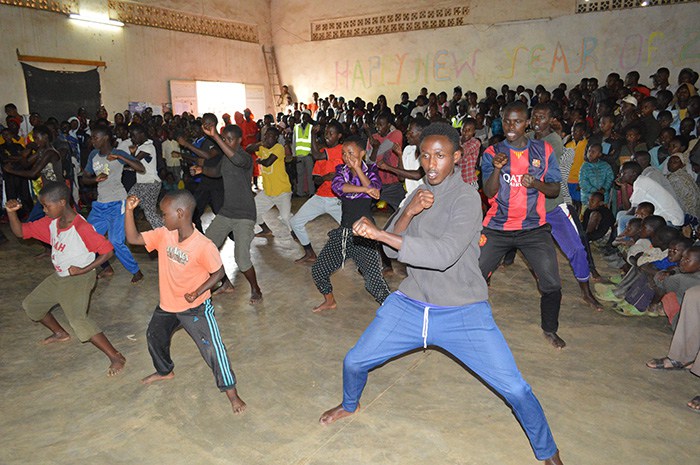 Delegates from the Taekwondo Humanitarian Fund (THF) and the Rwanda Taekwondo Federation (RTF) made a visit to the Kiziba Refugee Camp to officially launch the latest THF pilot project, the Kiziba Taekwondo Academy, operated in collaboration with RTF.

Received by UNHCR Rwanda, the delegation first made a home visit of one refugee family household where they met with a teenage girl and her mother who have been both attending the initial taekwondo trainings that have been taught since the very first visit of THF and RTF last February.

The mother declared that she was happy for taekwondo had empowered her daughter and improved her studies at school. The girl said that she really liked taekwondo because she felt less afraid and that she was looking forward to winning and bringing medals and pride to her camp.

After the home visit, a reception was held by the camp leaders that included demonstrations of taekwondo as well as kung fu, along with traditional dancing, drumming and singing. A crowd of 400, cramped into a 20 by 15 meter building, enjoyed most the demonstration of taekwondo, and even though the players had only studied for a few weeks, they showed a good grasp of basic movements and a real enthusiasm for the sport.

From April 1 onwards, the Kiziba Taekwondo Academy will run for an initial pilot phase of one year. Two local taekwondo instructors will offer daily training sessions twice a day, five days a week, while additional education activities will be introduced in the coming months. More than 400 participants are expected to take part in the training sessions.

In practice, the educational curriculum of THF’s taekwondo academies aligns with the United Nation’s Sustainable Development Goals. With sport having a powerful impact on the realisation of development and peace in its promotion of tolerance and respect, taekwondo has the potential to make great contributions to the empowerment of women and of young people, vulnerable individuals and communities while advancing health, education and social inclusion goals.

At Kiziba, emphasis will be put on the core values of taekwondo and Olympism in order to address the issues of vulnerability, lack of community and mentoring, as well as the ‘at risk’ issues associated with life as a refugee.

Enthusiasm to take part in the academy from the Kiziba camp residents was already measured at the occasion of the initial visit made to the camp in early February 2017. Since then, exploratory training sessions have taken place daily and have proven to create a high interest from the camp residents and already have a great impact, as was reported by UNHCR Rwanda.

With this first pilot project in Africa and thanks to the serious commitment of RTF, THF hopes to strengthen and further develop its field operations for future initiatives benefiting refugees around the world.