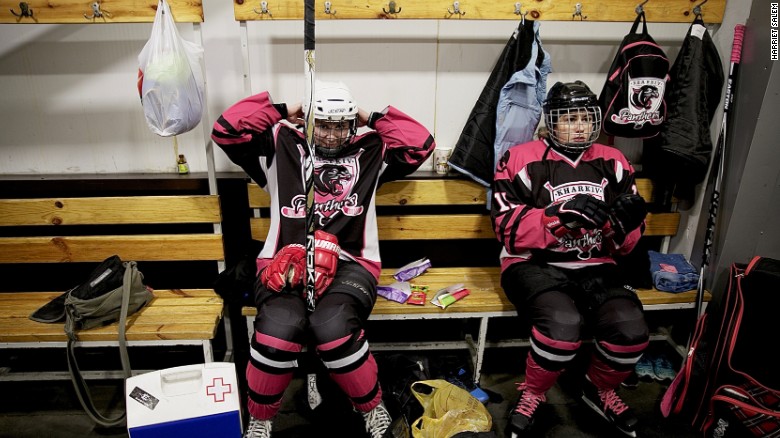 MEET THE WOMEN SKATING TO SUCCESS IN UKRAINE

Clad in a purple jersey with an orange crown emblazoned across the front, the Dnipro Queens forward whizzes across the ice at lightning speed and slams the puck past Kyiv Ukrainochka's goalie. The crowd goes wild. Horns blare. Players embrace.

With just minutes left on the clock Elena Tkahuk has netted the goal that will win her team Ukraine's first ever women's ice hockey league title.

In a symbolic gesture, these historic finals were played on March 8 to coincide with International Women's Day -- an event usually celebrated in Ukraine by men giving flowers to the significant ladies in their lives, not by women donning shin pads, face guards and skates to battle it out on the ice.

But there's still a long way for these women to go before they are recognized as sporting equals in a country where the United Nations rates female participation in decision-making as "extremely low" and perhaps the best-known sports coverage of women has centered on fears over prostitution and sex trafficking during the Euro 2012 football tournament that was co-hosted by Poland.

"In Ukraine the men, when they see me with my equipment, they ask me: 'Why are you playing ice hockey? You're a girl -- its better you're in the kitchen,'" says Valery Manchak, one of the star forwards of the Dnipro Queens team.

The scorer of 18 goals this season, the 20-year-old learned to skate as a child and, against her mother's wishes, took up playing ice hockey with a boys' team.

A sports fanatic, she dreamed of one day representing Ukraine at international level, but was forced to give up playing at 13 -- the age where men's hockey becomes a contact sport -- because there were no girls' teams to play with in the former Soviet state.

Disappointed but undeterred, Manchak took up boxing instead, and was soon competing at international level.

Ice hockey, however, remained her "one true love." So when two years ago she heard a team had been set up in Dnipropetrovsk -- a city some three hours' drive from her hometown Kharkiv -- she knew straight away that she would join.

"People have prejudices about women playing ice hockey, but when they see we're good they get interested, they start to respect us," she says. "So just getting out there and playing, that's a powerful thing."

Among Manchak's first converts to women's ice hockey was her mother who -- although initially disapproving of her daughter playing a "man's game rather than sitting home and studying" -- quickly became her biggest fan, attending all her games and loudly berating the male referee from the sidelines if he missed a penalty.

Years of hockey experience, however, makes Manchak the exception rather than the rule.

Finding enough players to cobble together teams was among the biggest challenges in getting the league up and running. Aside from the half-dozen or so who lived or were born outside of Ukraine, most of the league's 166 registered players had never played ice hockey before they signed up for a team.

To make up their numbers, like all the teams in the league, the Kharkiv Panthers -- who wear a striking pink-and-black kit with their growling namesake on the front -- have drawn players from a host of different sporting disciplines and professions: figure skating, soccer, yoga and fitness instruction.

KICK FOR HOPE TRAINS TEACHERS AND COACHES IN JORDAN